How to cook kimchi

Kimchi is a Korean side dish. This traditional meal is most of the times made using napa cabbage and radishes, seasonings like ginger, garlic or chili powder and salted seafood. The key feature of this dish is that the vegetables have to ferment before being served.

Because there are a lot of vegetables which can ferment, there are, consequently, a lot of versions of kimchi, each with its own combination of ingredients.

This dish is placed to ferment inside a refrigerator, which is also the place used to store it. Before refrigerators existed, kimchi was traditionally kept in jars somewhere underground in order to stay cool in summer and unfrozen during winter. 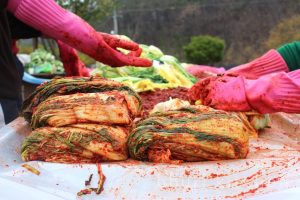 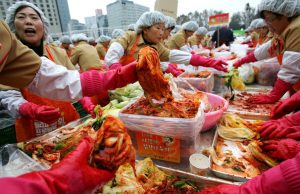 The salt should be iodine-free and without anti-caking agents. These things may inhibit the process of fermentation. In Korea, sea salt is used when salting the vegetables in kimchi. That salt is natural and very little is done to process it. This coarse sea salt is known as gulgeun-sogeum.

The reason for which you should use distilled, filtered or spring water is that chlorinated water inhibits fermentation.

Depending on the Korean region or family, different seafood is used to flavor kimchi. Besides fish sauce, ingredients like oysters or salted shrimp paste may be added. Instead of only one type of seafood, such as fish sauce, you can try a mixture of two.

If you want to make vegetarian kimchi, instead use just 3 tablespoons of water and optionally add a ¾ teaspoon of kelp powder.

Kimchi needs around two weeks in the fridge to gain all its potential flavors. That being said, it can be eaten at any moment. The aging process will continue inside the fridge and the dish will taste great for a couple of months. After that, it will become sour, but it will still be edible. Sour kimchi is used in other dishes, as well.

You can’t go wrong with kimchi as long as you make sure that the vegetables are always submerged under the brine. If at some point you see mold developing, just remove the covered parts and enjoy the rest.

How to cook kimchi was last modified: December 12th, 2019 by